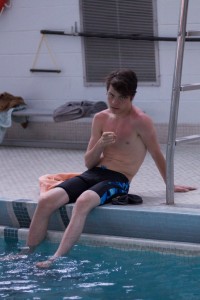 Atticus Dean Mitchell (born May 16, 1993) is a Canadian actor best known for roles as Benny Weir in the television film My Babysitter’s a Vampire and television series of the same name, and as Gabe in the film Radio Rebel.

Mitchell began his acting career in 2009 with a recurring role in the YTV series How to be Indie in which he played the role of Carlos Martinelli in eight episodes during the first season and two more during the second season. He played the starring role of Benny Weir in television film and series My Babysitter’s a Vampire[6] and was nominated for a 2011 Gemini award for his performance in the film. In 2012 he starred as Gabe in the Disney Channel television film Radio Rebel. In 2013 he guest starred in two episodes of Hard Rock Medical, portrayed Graydon in a post-apocalyptic film, The Colony, and also co-starred as Wookie in a Disney XD Canada/Family Channel original movie, Bunks.